Our journey to Zhangye was one that we will not soon forget, 30 hours in upright seats tends to be unforgettable. Rach and I were dreading the trip, we searched and searched but there were no more sleeper trains available for the arduous journey and we couldn’t postpone the destination because other accommodations had already been made. So we charged our batteries, downloaded movies, bought snacks and tea and made our way to the train station. I won’t bore you with the details of how long it took for us to figure out where to get our tickets, or that we waited in the wrong line for half an hour, just know that it is no easy task to get through a train station in China. As we boarded the train we realized it wasn’t a two by two set up of the seats, it was three by three facing each other with a small table in the centre. We held our breath as we came up to our seats and found that, for the beginning of the journey anyways, we had the three seats to ourselves.

Thankfully the seats across from us were occupied by two hilarious girls that spoke a modicum of english and were eager to share their food and play cards with us. As we enjoyed our card games groups of men and women would gather around us and watch us as we cheered a win or moaned in disappointment, although no one around could understand the game, it was always clear who was winning or losing. For 30 hours we talked (I use that term very loosely) with the girls across from us, napped, drank tea, stretched, played peek-a-boo with small children in the other seats and clenched our teeth as old men and women hocked and spat freely. Sometimes people would come and sit in the third unoccupied seat but usually left after a few minutes. For 30 hours we could not get comfortable nor could we use the bathroom without almost throwing up, it was a very tiresome train ride that we won’t be doing again any time soon.

We arrived mid day in Zhangye and were crowded by taxi drivers as we stepped out of the station, to their great dismay, we only needed one of them to take us to our hotel. It was a short ride that took us through the centre of the town and gave us a glimpse of how little there is to do here other than see the rainbow mountains.

The train ride had drained us so much that we spent the next day mostly sleeping and doing some work for the next couple days and then napping and then eating, not the most productive day but definitely a much needed day of rest. 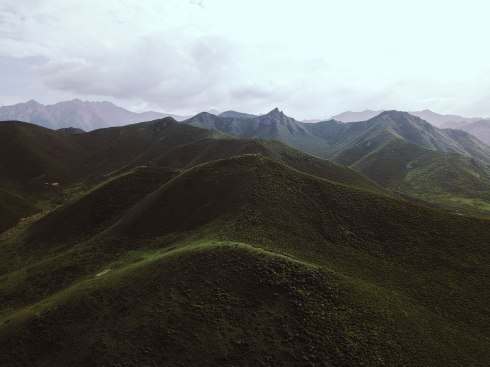 We decided that we would want to see the sunset at the rainbow mountains so we set up a driver for the next afternoon who would take us there and back for a pretty fair price.

We arrived around 4 O’clock which gave us time to get to all the view points, walk around at each and take pictures and video while we approached the golden hour before sunset which was perfect.

The park offers a busses for a small fee that take you from viewpoint to viewpoint and let you wander around for as long as you want before hopping on and heading to the next one.

You can go around as many times as you like once you have a pass but we only went once and spent about 20-25 minutes at each area. The mountains were colourful but apparently they are even more vibrant after a rainfall, either way, our breath was stolen as we looked out from each different scenic spot and took in the splendour of these rock formations.

As the sun began to set everything turned a little more red and gold which made for some outstanding pictures. As we were walking around one of the scenic spots, we met a guy named Joe from California who was also traveling china, we traded WeChat info and kept in touch over the next couple days.

The next day, Rach and I wanted to see what else Zhangye had to offer so we had our driver take us out to some beautiful yellow flowered fields where I was able to get some great drone shots but not much else. 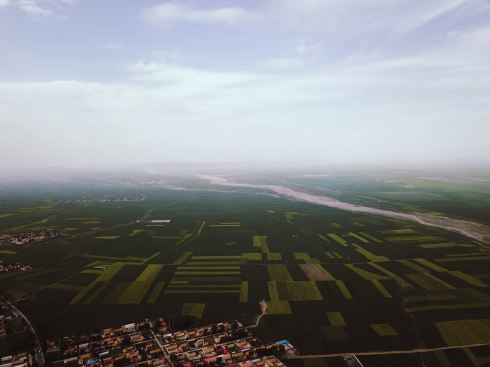 We met up with Joe the day after and walked around a park that was more like an abandoned circus area, and a couple different parts of the city. We swapped travel stories, ate some good food and found a place to get a foot massage. Mainly we spent our time just trying to entertain ourselves on our last day in Zhangye.

The next day it was raining which didn’t leave us with anything to do besides sit around the hotel until it was time to head to the airport. The airport was great because not only was it completely empty but the entire airport staff including the security officers would get together and dance for ten minutes as their daily exercise or just for fun, we sat and watched more than one dance routine as we waited to board our flight.