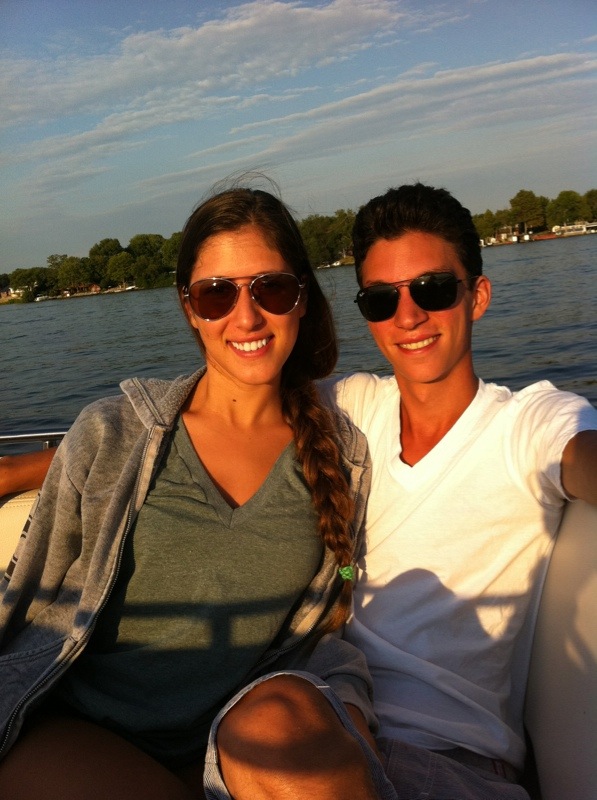 Posted on February 10, 2020 by theywentthere Posted in Uncategorized

Rachel and I recently celebrated our ten year anniversary and it had me reflecting a lot about the last ten years and, inevitably the next ten years. Coincidentally, we have just entered  into a new decade and for some reason it feels bigger than just another year. it feels appropriate to have a little recap and perhaps to share some visions of the future that we have.

Our relationship started out like any other, In mid 2009 Rach and I started dating, we knew of each other growing up but we were never that close until one night when we actually sat and talked for hours on the roof of my cottage as the moon rose over the lake. From that night forward we have been nearly inseparable. there was a lot of infatuation, lots of conversation about who we are, our dreams, beliefs and ideas of the future. Before we started dating, I had already made plans back to Italy to study and just a few months into our relationship, it was time for me to leave. We said we’d stay together and make the long distance work, well, we didn’t have to work too hard because after about a month and a half I was hopelessly love sick and desperate to come home.

Over the next few years Rach went to and graduated from OCAD university with a degree in fine art and photography while I jumped from job to job and studied music management. All the while we continued to enjoy everything that being young has to offer, we partied and travelled a bit, drank and smoked, grew close with new friends and left some old ones behind. Our first trip together was to Italy where we spent some time at my moms house and then packed up my little car and zig-zagged our way west across Europe. We stopped in Switzerland, Germany, Amsterdam and Paris and then made or our way down to Barcelona where we spent a couple weeks before heading home. It was an amazing learning experience for both of us, I think it was when we were both really inspired to travel because of how well we travelled together. The key points in the journey when we realized this I think was when we were at our ultimate lows, when we got a flat in the middle nowhere, when we arrived too late and had to sleep in the car or when a torrential downpour halted our adventure for hours on end. It was during these times that our true colours really showed and it was made abundantly clear that we could make the best out of any situation. We fell more in love with each other during these moments and it opened the door to an adventure filled future.

A few years later I proposed to Rachel one evening when we were home alone. There was nothing big and romantic about it, no fireworks or sky writing, no jumbotron proposal or anything like that. Just me and her in bed one night watching a movie, I said I was going to get some water but I was actually calling her dad to get his blessing. I knew beyond a shred of doubt that this was the woman I wanted to be with for the rest of my life. She said yes and we cried together because we both knew that nothing had ever felt more right. Something we decided very early on was that we wanted to travel before getting married so over the next year we began to plan a trip that would take us around a lot of the world. I don’t think either of us could have imagined what an amazing adventure it would turn out to be. The next year changed us again in a way that only had us falling deeper in love with each other, cultivating this connection that would have otherwise laid dormant. We were inspired every day by the people we met, the places we visited and by each other to want to continue learning, travelling and growing.

When we finally arrived back home, it was time to tie the knot, we spent six months planning our dream wedding and it was nothing short of amazing. The days leading up to it were the perfect prologue, with friends coming in from out of town and spending our time under the sun at the park. One of the most special things was receiving post cards and messages from friends we had made during our travels. By now we had already been open with our plan to move to Italy and we were in high gear getting everything ready to go. We really though that this would be it, the next step in our grand adventure that would lead us onward and upward. While it may not have panned out exactly as we envisioned it, we certainly weren’t wrong about it leading us forward. The ten months we spent there taught us a lot about what we wanted with our lives and who we wanted in our lives. It led to the ultimate decision to come back home, to be with family, in the place where we grew up and felt most comfortable. But we didn’t come back empty handed. We came back with our beautiful dog Mowgli who makes us smile and laugh every single day and who is a constant reminder to us that anything is possible when you’re with the people you love.

Ten years ago I never would have imagined that this is where we would find ourselves. We have experienced so much together, from midnight drives home eating cereal in the car to cross country road trips, early flights and late nights, we really have been through a lot. We’ve fought and made up, laughed and cried together, mourned losses and celebrated new life. We’ve shared so many firsts together and have so many more to come. It seems as though we’ve already spent a lifetime together and given how much we’ve accomplished in the last decade, I’d say that feeling is well placed. Now we step into a new decade and I can honestly say I’ve never been more excited in my life. We’re pregnant with a baby girl, she’s due in April and my heart swells  with joy when I think about what the next ten years holds for the four of us. More adventures, more firsts, more nights watching the moonrise and falling more in love with the woman of my dreams. Most importantly, being surrounded by the people I love and who love me back. I don’t usually plan out these posts, they kind of just come to me and the moral usually reveals itself as I’m writing it. It makes me smile to be finishing up here and realizing that the most important thing is to love each other. So with that in mind, live life with passion, love deeply and let it be known that you have love to give, smile at people and watch them smile back, be kind to one another and watch where it takes you.