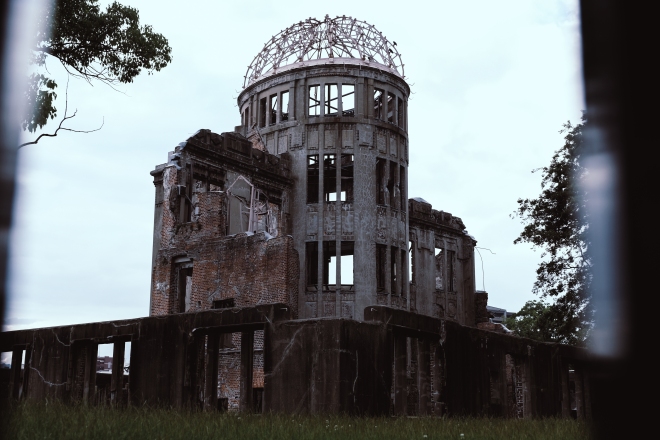 The much anticipated and historically horrifying, Hiroshima. We only had a couple days to spend here and we knew what we wanted to see. The Hiroshima Peace Memorial Museum, the Atomic Bomb Dome and the Children’s Peace Monument were at the top of our list.

The city itself is so beautiful that it’s hard to imagine the devistation that took place many years ago, time seems to have healed the city and the people within it, for the most part. We were met with warm smiles and kind greetings everywhere we went and a general sense of happiness filled the air as we meandered the streets. Retro shops mixed with modern architecture and everything in between can be found on the streets of Hiroshima. Traditional food and modern fusion also gives you the option for a well rounded palette when it comes time to dine.

We explored the area near our hotel which was near the Atomic Bomb Dome, the walk along the river was beautiful and peaceful but something about being in the city and thinking about why we were here had us walking quietly and thoughtfully . 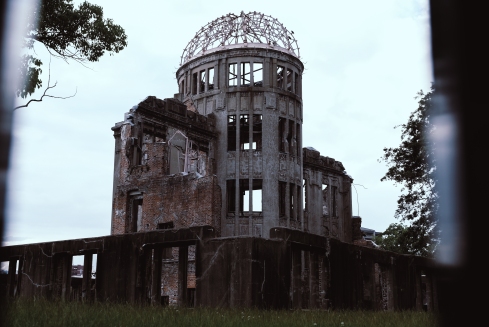 We crossed the river to find the monument that had been built in honour of the children that did not survive that day in 1945. The towering structure with the girl standing on top holding a crane was indeed a remarkable monument to see. A bell hanging from the middle gives people the opportunity to feel connected to something bigger than themselves as they ring it in honour of past, present and future lives in the dream for peace. 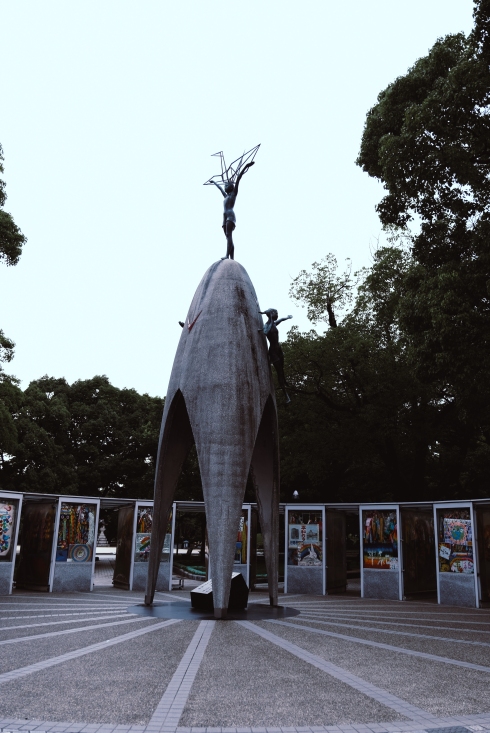 Our day wouldn’t be complete without a game of backgammon at the hotel bar and a nice cold beer. We settled into a quiet corner and began our nightly tournament and discussed the trip so far. The things we had seen and what we were going to see, what we enjoyed, had to see again or wouldn’t recommend at all. Dinner was on the rooftop patio where we were served a large plate of mixed meat and veggies and we barbecued the food right on the table. It was delicious and it was nice to sit under the stars and eat, we were off to bed before the moon rose.

Rising early the next day was a must as we wanted to get to the museum early enough to beat out the rest of the tourists and be able to get the audio guide to accompany us as we walk through. All of the displays are in english but it’s nice to be able to take in the gravity of the museum while just listening to lessons and history. The stories were heart wrenching, the video testimonials were tear jerking and the display cases and stories behind each artifact is enough to make you want to cry, and cry we did, as do many people when walking through this museum. There is not only a feeling of profound loss but also a horrifying understanding of terrible capacity we have for destruction. As sad as it was, we walked out of there a little smarter than when we came in, a little more aware of the world around us and a little more compassionate for every living being.

We left quietly and walked back to the hotel in almost complete silence, the sun shining off the water and lighting up the city in its afternoon glow did little to lift our spirits. We walked by a bank where you can see a shadow of what was a man waiting for the bank to open on the morning the bomb was dropped. A shadow that remains burned into the stone itself as some kind of timeless testament to the resilience we have against anything that tries to wipe us out, most prominently, us.

One thought on “Hiroshima”