It had been a very long month of travel and Beijing was our final stop in China. We had been looking forward to this destination for two reasons, one being the Great Wall of China and the second being the opportunity to meet some family friends of Rachel’s mom, who would end up becoming great friends of ours as well.

We arrived by train around 4pm and made our way to the subway that would take us to our hotel. Normally we would not have stayed in such a nice hotel, but we were being given the deal of a life time by our friends that we had yet to meet. We were set up in a business class room with access to all of the amenities, lounge areas and bars in the hotel at no extra charge to us. We were in awe as we walked into the hotel lobby and then again as we walked into our room. We had been text chatting with our benefactor but had yet to meet him, his only concern was that we were safe, happy and comfortable in our room. He assured us we would meet the next morning and urged us to get a good night sleep. Our hotel room was the first place in a month that had a bathtub in it and we took full advantage of it before calling it a night.

At 8am the next morning we had the pleasure of meeting Joey and his two sons David and Michael. They greeted us in front of the elevators holding bags that were stuffed with gifts and goodies for us. Bottled Evian water, candies, body lotion, Advil, tea, pens, cookies, keepsakes and so much more, we were overwhelmed and couldn’t have thanked them enough for the generous gifts. As we sat for breakfast and got through the pleasantries we quickly became comfortable with each other and soon found ourselves talking like we had been friends for years. They were all so excited to have guests visiting that they tittered about what we should do, where they would take us and what we should see while we are in Beijing. They decided it was most important to feel relaxed and have a full belly first and foremost and on that note, we were treated to foot massages and lunch at a beautiful spa called Dragonfly.

During lunch we spoke about ourselves, our history, our desired futures and so much more, we were also introduced to a friend of Joeys named Einar, who only added to the level of comfort we were feeling as he seamlessly joined the table and our hearts as a friend. We ate and laughed and time flew by as it tends to do when one is in good company. Later that night Rach and I were treated to yet another surprise as Joey handed us prepaid vouchers for a couples massage, we put them to good use and had another great dinner that evening. 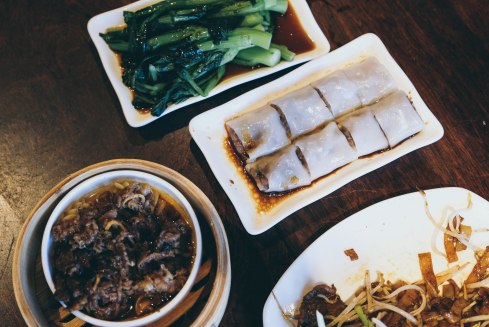 The next day we were advised to head to the art district otherwise known as the 798 area of Beijing, we made our way there and began exploring the many different galleries, taking pictures of the art installations and wandering though unique little stores that dotted the area.

We were reminded of a much bigger version of Toronto’s own distillery district, with the industrial feel of the area.

Later that night we went over to San Li Tun area to get falafel at the highly recommended Bite-a-Pita, boy was it good, we had our fill of babbaganush and humus all while making small talk with owners. We walked around the huge outdoor style mall area and window shopped or watched kids play in the fountain in the middle of the plaza. We know we weren’t the only adults there who were wishing we could frolic in the water with the kids, it was 34 degrees and humid as hell that night and nothing would have felt better than running through those fountains. 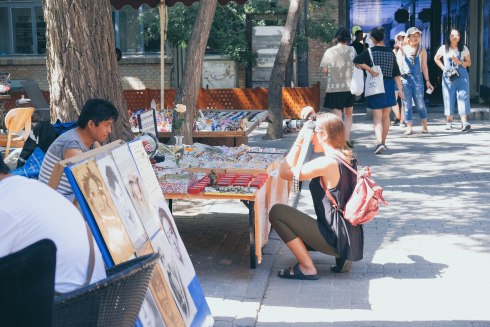 We made our way home to take a cold shower and go to bed because tomorrow we would head to the much anticipated Great Wall. Just an hour drive away is the small town where Rach and I would reside for the night. We stayed at an inn with only three rooms to speak of, there was a vegetable garden and a couple tables outside where they served you meals. The couple that ran the Inn were so nice, they offered beer and tea as we arrived, they cook dinner with fresh produce from the garden and you eat while listening to the quiet buzz of nature surrounding the area. The town itself is very close to one of the main entrances to the Great Wall, but rach and I aren’t so simple, we wanted something more exciting than the typical overcrowded wall.

We had heard from Micheal and David that if you wake up early enough and hike up a rough path, you can see a side of the wall that no tourist gets to see, we asked our Inn keeper if he would show us the way and he readily agreed to take us half way and then point us in the right direction. The next morning at 4am we were at our the door and making our way through the quiet town and up into the hills surrounding the Great Wall. An hour and half hike up rocky terrain brought us to the base of the unused and unguarded portion of the wall. We walked around a little bit trying to find the right spot to climb over until we heard someone calling out and reaching his hand down to help us over, we were a little skeptical but shrugged our shoulders and took his hand.

It was remarkable, there were just five of us for as far the eye could see, the empty wall stretching on for miles and miles in the morning light and soon it was just Rach and I. 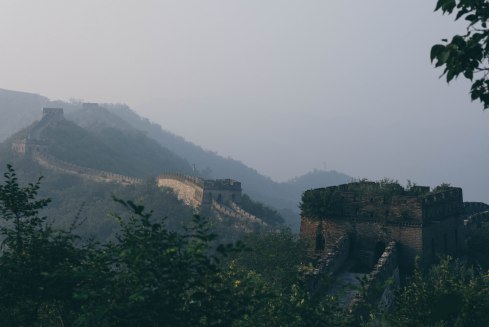 Staring in silence as the sun began its ascent over the horizon, the haze began to lift and even more of the wall and the surrounding forrest was visible. The drone had the freedom to fly far and wide that morning and it definitely felt good to be able to stretch out with it and take in the full view of the scenery. 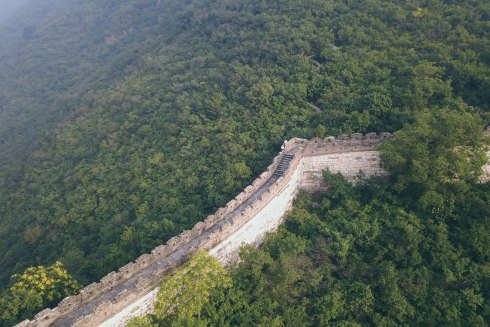 We were making our way back down the mountain right as the days heat began to settle in, we could not have imagined climbing up in this temperature and felt bad for all the tourist that were just beginning to line up to see the wall in what would be a blistering hot day. We packed our bags and called a taxi, as we were leaving the owners of the inn gave us hugs and told us to come back anytime, that their home was our home and it was a pleasure to have had us stay with them. It was one of the nicest gestures anyone had shown us during our month there and all the negative that we had experienced fell away.

We made our way back to Beijing for our last night in China, all the while thinking about how one persons kindness can change your entire outlook on something. We arrived back at the hotel that afternoon and prepared everything for our departure to Seoul the next day. That evening we met up with Joey, David and Micheal for the last supper, we had great food and played pool, told jokes and stories and laughed the night away until the restaurant was empty and they were closing up shop.

Before our flight the next day we were invited to their house to spend some time in a place that truly felt like home, we played with their pups, played video games and ate ice cream as we chatted. It was time to go all too soon and we were a little sad to have to say goodbye. To say that Joey and his family are nice people would be a gross understatement, kindness runs through their veins, generosity lives in their hearts and love emanates forth from each of them as surely as the sun rises every morning. We were more than moved by their expressions of love for each other and for us and are grateful to have them in our lives as friends.

We can’t wait to journey back to spend time with our new friends and see more of what Beijing has to offer.

One thought on “Beijing”