Guilin, our first destination in China!
We were thrilled, exhausted and overwhelmed by everything this country had offered us so far. Nothing could have prepared us for China, similar to India, it is a world of its own in so many ways that t.v. shows and books cannot possibly explain. Guilin actually went pretty smoothly, we exited our train and found a line up of taxis, we showed him the address and even though he took a roundabout route to get there, he still got us to our hotel and we were happy. We were even happier when we entered the Zen Tea House to smell a wood burning fire in the middle of the reception area, in the next room over someone was preparing green tea and the smell of incense wafted out to welcome us. The woman behind the desk, Esther, spoke a little bit of english and helped us get checked in gave us some information about the surrounding area and tours we could potentially take. 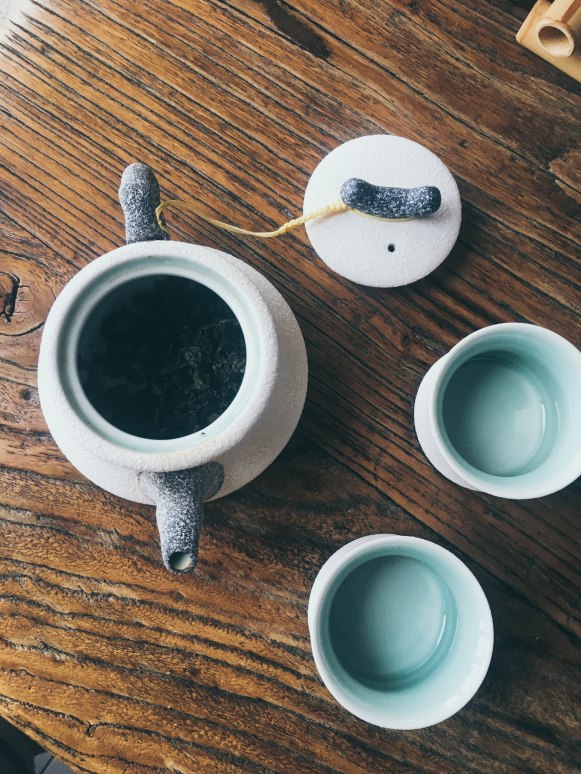 The room was beautiful and lived up to the name of Zen, it was clean, bright and overlooked the river. We unpacked and settled for a bit before going to see what the area had to offer. We found massage parlours, phone stores, restaurants and bakeries. We ate dinner that night at a place that was recommended by Esther and we learned quickly that we would need to utilize our charades skills if we wanted to survive the month. The next morning we were offered a choice of a western or traditional breakfast and we both went for the traditional, noodles with a fried egg on top and sweet bread on the side. 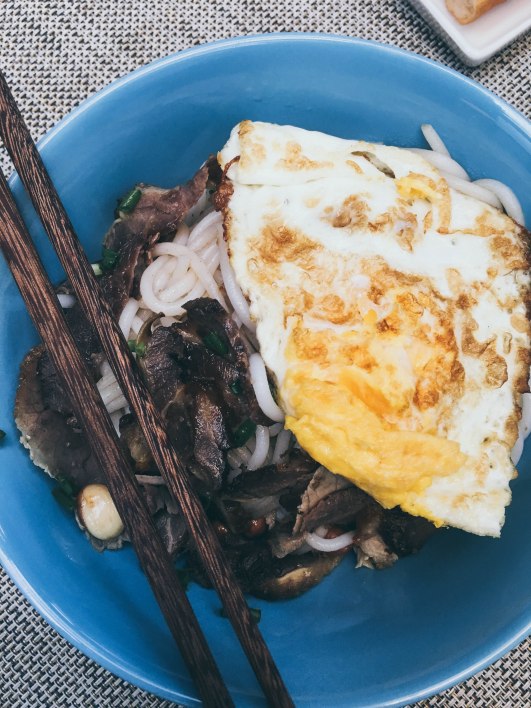 While eating, we met a couple of guys from California and started talking about our experience so far, it turns out we were both headed in the same direction so we decided to travel together that day to Yangshuo and hike the mountain. It was super helpful that one of them (Wes) spoke a bit of Chinese. He helped us get the bus and a driver to take us to the base and wait for us to come back down. 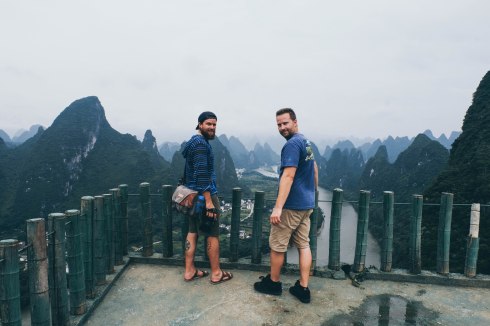 As we walked the five hundred steps up the mountain to the viewing platforms, we couldn’t help but be reminded of Phong Nha in Vietnam, the mountains and landscape were eerily similar.

We spent a little under an hour walking around the top of the uncrowded mountain, taking pictures, flying my drone and watching as a couple had their wedding photos taken.

Back in Yangshuo, we walked around the city with our new found friends, ate some nice street food, drank fresh coconut milk and photographed a gentleman on his boat. We made it back to our hotel just after sunset, we had all passed out on the bus ride back and were ready to get some dinner. 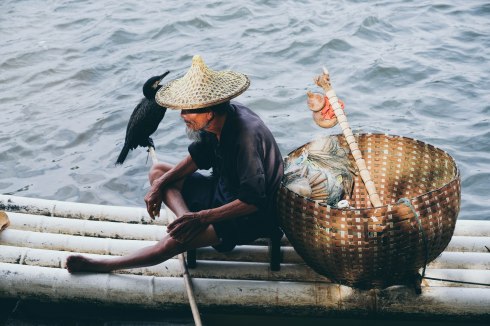 After a quick change, we met back in the lobby and made our way to a street that was overflowing with small tables and chairs, laughter and loud conversations filled the air as we got closer. Propane tanks dotted the sidewalk and hoses snaked their way to the tables where big hot pots stood boiling with all sorts of delicacies. We were seated immediately and handed a menu, while Wes can get a few words out in Chinese, reading it is a completely different story, we used my Waygo app to decipher which hotpot had some kind of meat it in but thats as far as the translation went. We ended with a couple beers, a couple bowls of rice and big steaming pot of pig intestines and vegetables. All said and done, it wasn’t as bad as it sounds, it was super flavourful, not to spicy and the atmosphere made it hard not enjoy the experience.

The next day was gloomy and rain filled so we spent it inside watching movies and writing blogs! We worked on our Hong Kong video and planned the next part of our adventure. Overall Guilin was a nice jump into China for us, we met nice people, had a great hotel stay and were excited to move on to our next stop, Zhangjiajie.

There was an error retrieving images from Instagram. An attempt will be remade in a few minutes.